Let me rephrase that...Remembering the PEOPLE on the Titanic.
When I think of the Titanic, I am ashamed to say, it is the beauty and grandeur that I see...the floating palace that it was, the ship of dreams. When my son thinks of the Titanic he sees the ship of dreams on the ocean floor where bacteria are slowly devouring the steel making it almost unrecognizable. (He would love to someday go down and see the wreck site before it is gone.) What do you see when you think of the Titanic?
What we all should really see when we think of the Titanic are the people. Especially the people who perished.
At 11:40 p.m. on April 14th, the Titanic's side swiped the iceberg and at 2:20 a.m. on the 15th, the Titanic disappeared into the dark Atlantic Ocean. It took only 2 hours and 40 minutes. But, for those poor souls on board, that no doubt must have been the most terrifying 2 hours and 40 min. of their lives.
Because of all the movies that have been made it is so easy for us to think of it as just that...a movie and we forget that this tragedy really did occur. There were 2,208 passengers on that ship, and out of those, 1,496 did not survive. They came from all walks of life. Whether they had only a penny to their name or a million dollars to their name, one thing was for certain, at that fateful hour they all had one thing in common, the will to survive. And unfortunately, many did not survive due to the lack of lifeboats and/or the lack of status. The majority of those who perished were the ship's crew and 3rd class passengers. Who are we to think that we are ever better than the next person? Jesus tells us we should think of others as better than ourselves. Wow, if we could only have that mindset all the time how much better of a society of people we would be.

Somehow around the age of 4 my son became fascinated with the Titanic and would spend hours with his toy Titanic boats. One of them when placed in water would actually start filling up with water and would soon after break in two and sink to the bottom of the bathtub. We have tons of books about the Titanic and he drew many pictures of the Titanic and this is the one I would like to share with you. 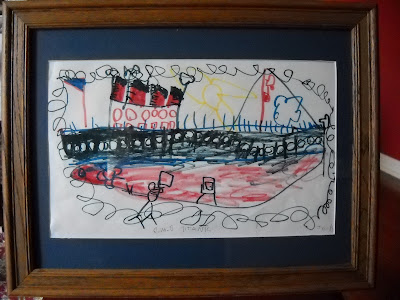 A couple of weeks ago my kids and I went to the 100th Anniversary Titanic Exhibit in Kansas City where we got to view some of the original artifacts that were found at the wreck site. The below image is the picture on the brochure that I got while there, I thought it was so pretty that I wanted to share it with you. 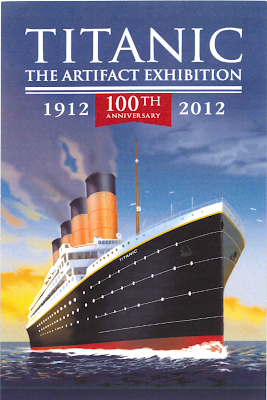 When we got there we got our boarding passes ... 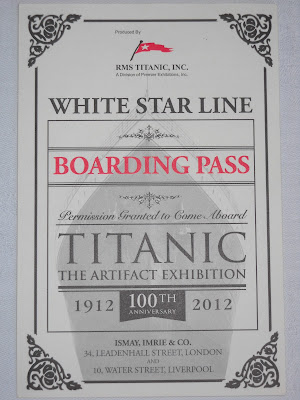 Another favorite antique postcard of mine. This is how I wished I was dressed when I boarded the Titanic... 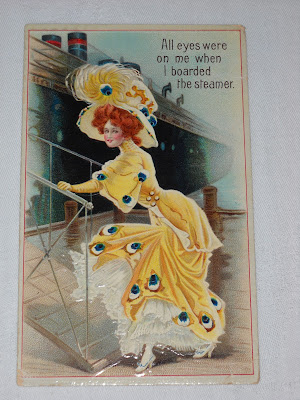 But instead, this is how we were dressed! Don't you love how we stick out in our modern clothing?! But, of course, everyone else did too! Check out the ghost of Capt. Smith on the left side. One of the employees there took this photo in front of a blank wall and this is how it turned out! With the Grand Staircase behind us! Isn't that cool?! 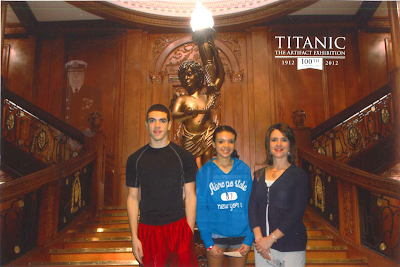 Once inside the exhibit we weren't allowed to take any pictures. :-(  And as neat and fascinating as it all was I still had to remind myself of the many lives that were lost that night.

So once we got to the end of the exhibit, guess what was right there before my eyes?! The Gift Shop!!! Yay! I had been looking so forward to that! Ohhhh...what to buy! After some thinking, my son and I decided to buy 4 reproduction 10" White Star Line First Class Dinner plates (they are actually the breakfast and lunch plates) so we could set our table in remembrance of the Titanic (and people!) every April 10th-14th. So this got me really excited because that would give me another reason to DECORATE! This prompted me to get the movie out and look closely at how the dining room table was set. I didn't want to go out and spend a ton of money to accomplish this, since we kind of paid a lot for the plates...yikes!!, but I wanted it to look good. So I headed out to the Thrift Stores and Goodwill and found some white table linens for a couple of bucks. Moved some things around to get sort of "the look", and here we are! It is not quite as fancy as I wanted it to be but is the best I can do right now.  I wanted a pair of tea light lamps with those cute little shades but couldn't find them anywhere! What's up with that?! So I used just plain old glass candle sticks for now. Maybe some day when I'm not looking for them I'll find just the right ones at just the right price. And I would also like to get matching salad plates to place on top of the dinner plates, but that means going back to the exhibit (before it leaves in Sept) and spending more money! Sometimes I just get too into things, do you all ever do that?!
Okay, after all of that rambling on let me show you my table. 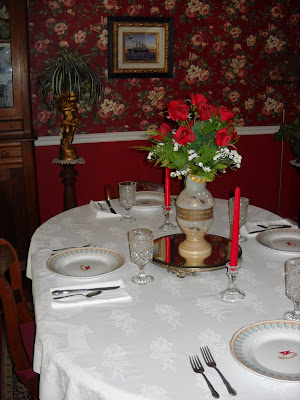 I didn't have 15 different forks and spoons to lay out, so it looks kind of plain. 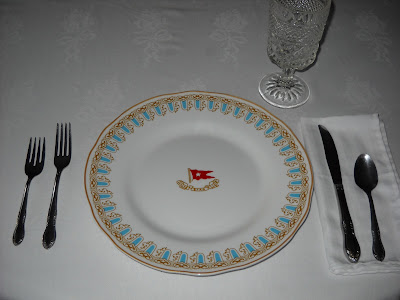 I moved the gold urn from the parlor to here because it reminded me of the newel post lamp on the Titanic's grand staircase. And the picture was hanging in my son's room for many years, I had painted the frame the same colors as the Titanic, so I brought it down to hang up for the occasion. 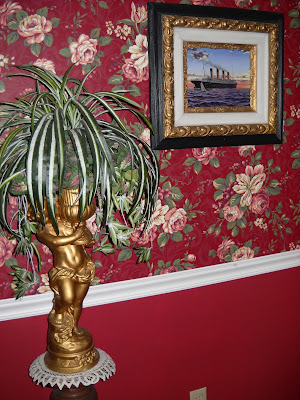 Check out this menu! Wow! I have to say that I won't be cooking a first class dinner around here!!! Tonight we are having Taco Salad, how's that for fancy?!!  lol


The First-Class Menu
As served in the first-class dining saloon of the R.M.S. Titanic on April 14, 1912


I want to end this post with a excerpt out of a book called "Heroes of the Titanic" written by Anne Marie Welsh.
The Titanic's fateful voyage is a tale of opulence, tragedy, and heroism. There are many stories of those who survived-and of those who perished-to remind us that life can take unexpected turns that we can't control. Those stories also show that, when times are at their most difficult, each of us has the opportunity and the capacity to become a hero.
Thanks for visiting and have a great week!
Posted by Gina @ VictorianWannaBe at 6:59 PM

Gina @ VictorianWannaBe
Welcome to my blog! My name is Gina, I am married, have 2 "almost" grown children. I work for a local Estate Sale and Garage Sale Company and have way too much fun with that! In my free time I enjoy going to auctions and searching Antique malls and flea markets for Victorian treasures. I am constantly trying to "Victorianize" my 1989 home with these treasures. I love to decorate, create vignettes and enjoy staging photos.

If you would like to use any of my blog photos please link back to Victorianwannab.blogspot.com